This is the third part of Ryan and I's California Adventure.  First we hiked the PCT, and summited Mt Eddy.  Next we drove the PCH through the Red Wood Forests and down to Napa Valley, with a short stop in the Russian River Valley.

On our first full day in Napa we woke up and took advantage of Ryan's Hilton Honors and had ourselves a nice (free) breakfast.  The we drove up to Calistoga to start our day Sampling Wine at Chateau Montelena.  For movie/wine geeks out there, this is the winery featured in the movie Bottle Shock.  While this winery may have put Napa and California wines on the map as being just as good as French wines, neither Ryan nor I felt that anything we tasted was that exciting.  Don't get me wrong, the wines were good, but similar to Seghesio from the day before, you could easily find similar quality, or similar tasting wines from other wineries.

Next we drove south down to Grey Stone CIA based on a recommendation by my aunt Rosie.  While we didn't do any wine tasting, and some how left without eating anything...we did enjoy looking at the corkscrew collection as well as learning about many of the local winery owners in the barrel room.  The receptionist encouraged us to visit the Charles Krug winery that was literally right across the street from the CIA.  Charles Krug has a small plot of land that the CIA students use to grow some of their ingredients on.  While we didn't purchase any pastries or other snacks, I did pick up a copy of "The House of Mondavi" which tells the tell of Napa's great wine dynasty.  So far, it's really interesting.

Since it was so close, and came with a great recommendation, Ryan and I hopped over to Charles Krug for the best wine tasting experience we had on the entire trip. As you may notice if you visit the website, Charles Krug is owned by the Mondavi family, lets just say that story is in the book. There is a giant sign outside near the highway stating that they were voted as one of the top 10 best wine tasting experiences in Napa.  Initially I would never have visited simply based on that obnoxious sign, I like to take the road less traveled.  But, there is a reason they have won this award.  Yes their wines are great, but our server was very fun to chat with, very knowledgable about wine and the wine making process, and was nice enough to give us an extra sample of their port.  Not only was the port good enough to prompt Ryan to buy a bottle, but the port sample comes with a dark chocolate truffle made by students at the CIA.  OMG...the truffle was to die for.  Why they don't sell them at the winery I have no idea.  Any who.... go to Charels Krug and try the port.  Another benefit of chatting up our server was that he steered us away from visiting Hall Winery (recommended by the woman at the CIA), and instead encouraged us to try Cade.

So we took a really windy road up to Cade.  Unfortunately they only take 'by appointment only' reservations.  But sometimes when you are really polite.... someone gives you a free sample of their incredibly smooth sauvignon blanc to sip on their patio.

By this time we were both hungry, and in need of food to help soak up all the wine in our stomachs.  On our way to Napa the day before, and on our way to Chateau Montelena in the morning we spotted Buster's Southern BBQ.  The Meats were great, perfectly smoked and oh so tasty.  I had the cole slaw which was so bland and boring I took 2 bites and didn't bother with the rest.  The 3 bean salad was basic but good, and not bland.
Both Ryan and I were a little over-wined at this point and decided to go for a short hike.  We had already done our research and knew that Mt St. Helena was probably too long of a hike for what we wanted (10 miles).  Luckily, our server at Charles Krug once again came through for us and recommended a shorter hike to Table Rock.  Both Trails start at the same place, Robert Louis Stevenson State Park, (no admission fee required) which can be a little hard to navigate since the parking lot is small and comes up quickly when driving the very windy Highway 29.  It felt good to get out and stretch our legs after several days of mostly sitting in the Patriot. The view of the valley was gorgeous as well.

The drive back to Napa took longer than either of us expected, something you learn to expect when driving in the area. Once there we freshened up and went to Oxbow Market.  There was so much going on inside the market, it's a neat set up, but loud and overwhelming.  I was still kind of full from lunch and just got a veggie salad, Ryan was craving pizza and finally settled on one from Ca Momi.

On our last day in California we were still feeling a little wined-out.  I would suggest keeping your (Napa/Sanoma time to 2 days with a few other activities thrown in).  After breakfast at the hotel we started our day with a tour of the Jelly Belly factory!  The tour is free and lasts about 40 minutes.  It was fun, but I thought the sample of rocky-road fudge was much better than any of the jelly beans I tasted. Depending upon what time you get to the store, and how much shopping around you do, expect to spend 90 minutes there. I wish we had come a little later...because they do a wine and chocolate pairing from 11-4pm.  But we didn't want to wait around an hour for it. Ryan had his heart set on sampling some good bubbly so we drove over to Gloria Ferrer in Sonoma, about 22 miles away. 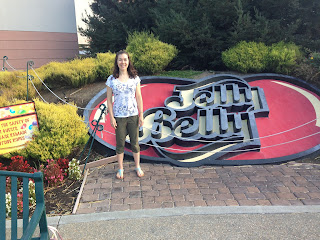 Once again, just expect your drives to take twice as long as they should when driving in Napa/Sonoma. We were 15 minutes late and missed the tour of the Gloria Ferrer winery, this was actually very very disappointing for us.  As much as we enjoy tasting wine, we both really wanted to learn more about how the grapes are grown, harvested, and turned into wine. Until now most of the tastings we had enjoyed were done at a bar, and since we visited late in the season, after harvest we were typically only the second couple tasting at the time. At Gloria, we were seated outside and as you can see from the picture there were many other couples there. In order to maximize our tasting experience we split two different tastings which allowed us to try 6-7 different wines. The wines were nice, and it was fun to compare several different types of sparkling wine side by side. But neither of us felt any of them were worth buying on the spot.  Our favorites were the Sonoma Brut and the Royal Cuvee Brut.

This was one of the first wineries we visited where our server actually discussed how the droughts over the past 3-4 years have negatively impacted the grapes.  I believe 2011 was the last time they had any appreciable rain. While this allows the growers to completely control the vines water 100%, until this point no one had really made mention that it might be a concern for future crops, or a sign of our changing environment.
After all those bubbles, it was time for some real food.  We drove up to the Sanoma market square and walked around for 10 minutes before I decided on Basque Boulangerie Cafe.  Their real food menu isn't huge, but the Tuna Nicoise salad is great, even if it isn't 100% traditional being topped with potato salad and a shredded jicama salad.  We tried to resist, no really we did.... but then we gave in and split a slice of Beehive Cake.  OMG, forget the wine... the bottom layer was a thin slice of sponge cake soaked in honey with about 2 inches of custard and toasted almonds on top.  By the time we left the sugar was coursing through our veins so hard we had to take a brief nap back at the hotel instead of wandering around the rest of downtown Sonoma which has some interesting looking historical buildings and beautiful central park area where school kids were playing and people were picnicking. 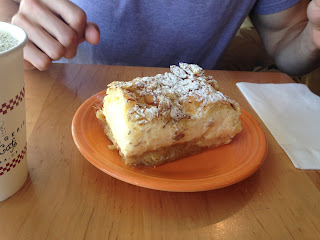 After our nap, and repacking our suitcases Ryan and I drove up to Yountville where we had dinner reservations at Ad Hoc, a Thomas Keller restaurant. (The French Laundry is a little out of our price range...)  Even though we had time to stop at Dom p Winery, neither one of us was really in the mood, so we decided to just do some window shopping in Yountville.  While there are a few stores, there was definitely not as many as we expected.  Ryan was getting hungry, and I just wanted an Americano.  For more sugar we shared 2 (BIG) macaroons from Bouchon Bakery, another Thomas Keller property.  The vanilla macaroon was amazing, the cappuccino macaroon was almost as amazing.  If you are in the area, plan on stopping by for an afternoon treat. 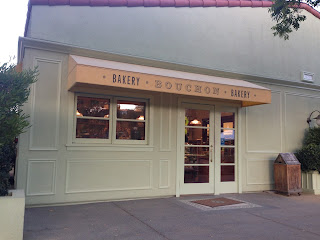 After sitting on a bench outside Bouchon, people watching, and enjoying our second sugar bomb of the day, we went for a little walk on the town trail and basically just wasted time.  Then on to the meal we had been anticipating the entire trip! 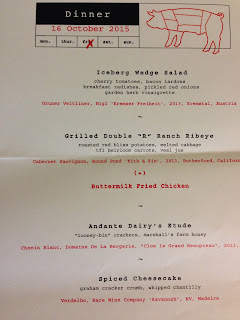 All courses are served family style, except desert.

1. The salad was good, especially the bacon lardons.
2. Best Ribeye I've ever had.  Not that it's something I ever really order, but it was one of the best pieces of beef I've ever eaten.  The potatoes, carrots, and cabbage were equally delicious.  Ryan wouldn't commit and say it was the best fried chicken he's ever eaten, but he said it was definitely up there.  The fried rosemary that is sprinkled on top, adds a subtle flavor that reminds you of Thanksgiving.
3. I really enjoyed the Etude cheese. It had a texture and taste similar to parmesan, but with that goats milk earthiness. The crackers were very unique, exceedingly thin and crispy.
4.  I love cheesecake, and this was really good cheesecake. But after the other two deserts of the day, I actually only ate 1/2 of my serving, which wasn't that big to begin with.  I didn't ask, but wanted to...did they make their own graham crackers?

For people who have never been to a more upscale restaurant with multiple courses, or a prix-fixe menu, Ad Hoc would be an excellent first experience.  Thomas Keller keeps the food very approachable and familiar, but the high quality ingredients are cooked with impeccable skill.

Ryan and I split a bottle of Bunter Spring Pinot Noir, a recommendation by our server.  It was AMAZING!  Best wine we had the entire trip.  It had such a deep smooth flavor I can't even describe it.  The winery just happens to be owned by our server's brother, but he didn't reveal this until we were finished and told him how much we enjoyed drinking it.  Turns out out, Bunter Spring sustainably raises all their grapes, using no chemical herbicides, pesticides, or fertilizers.  We were so impressed with the wine that we have ordered a CASE; a mixture of their whites and reds. 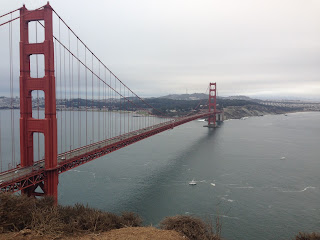 In the morning we woke up early and drove down 101 so we could cross the Gold Gate Bridge before dropping off the Patriot and waiting at the airport, where we ate leftover fried chicken, ribeye, and potatoes.

Brenna
I'm a dietitian with an appetite for all things delicious and interesting.